Class action filings are plentiful in California.  Each day, there are 10-20 new class actions filed in California’s state and federal courts.  They include the following categories of cases:

Specifically, over the past month in Northern California, consumer, employment, and TCPA class actions have dominated the filings, as indicated in the chart below. 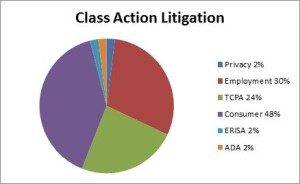 With so many class actions filed, many of them are settled prior to trial – 2 were especially noteworthy.

Attorneys in Hanson Bridgett’s Class Actions and Mass Torts group monitor these developments in Northern California on a daily basis and have deep experience defending and favorably resolving these types of claims.

Can Congress create a statutory right to standing for a Plaintiff who suffers no concrete harm?

On November 3, 2015, the Supreme Court heard oral arguments in the closely watched class action, Spokeo, Inc. v. Robins, a case dealing with a statutory cause of action created by the Fair Credit Reporting Act (FCRA). At issue: whether Congress can create a statutory right to standing for a plaintiff who suffers no concrete harm?

Spokeo is a website that allows users to search for an individual’s personal information. In Spokeo, Plaintiff Robins alleges that Spokeo willfully violated the FCRA by publishing a consumer report that falsely claimed he had a graduate degree and was married with children. According to Plaintiff, the false report injured his job prospects. Spokeo moved to dismiss the case, arguing that the alleged injury was not enough to meet Article III’s requirement that a party seeking relief must have suffered an injury-in-fact. The District Court had dismissed the case, finding that Robins lacked standing because he failed to allege an injury in fact. The Ninth Circuit Court of Appeals sided with Robins and reversed the District Court’s decision, holding that Robins had Article III standing because the mere violation of a statutory right was enough to satisfy Article III.

END_OF_DOCUMENT_TOKEN_TO_BE_REPLACED

Employment policies and procedures are often an afterthought when starting a tech company, but they could mean the difference between success or failure.  Even well-established tech companies are learning their lessons the hard way.

A lawsuit filed in March by a former computer engineer at Twitter serves as a wake-up call for tech companies to have clear, written, nondiscriminatory, employment policies and procedures and to train supervisors on those policies.  These simple steps could prevent costly employment discrimination lawsuits altogether, or at a minimum, enhance the defensibility of such cases.

Implementing equal employment opportunity and anti-discrimination policies early as well as the consistent enforcement of such policies help promote a non-discriminatory culture as a company develops.

END_OF_DOCUMENT_TOKEN_TO_BE_REPLACED

Is that unwanted promotional text message coming from a human or a machine? It matters for purposes of the Telephone Consumer Protection Act.

END_OF_DOCUMENT_TOKEN_TO_BE_REPLACED

This is the third in our series of recent case reports:

California Civil Code section 1747.08 (Song-Beverly Credit Act of 1971) prohibits retailers from requesting or requiring as a condition of accepting a credit card as payment that the cardholder provide “personal identification information” that is then recorded in some fashion. In Pineda v. Williams Sonoma (2011) 51 Cal.4th 524, 527-528, the Supreme Court held that a person’s ZIP code constitutes “personal identification information” within the meaning of CC section 1747.08.

END_OF_DOCUMENT_TOKEN_TO_BE_REPLACED

Briefly is a blog by Hanson Bridgett LLP. It is designed to provide readers with updates on the latest litigation developments in California. Our focus is on general litigation as well as issues surrounding class actions, products liability, discovery, privacy, cybersecurity, and the professional practice of law.